UK-based investments have generally under-performed their overseas equivalents in recent months. This leaves them unloved, potentially undervalued and in need of good news. In this article Toni Meadows, Chief Investment Officer at Omnis Investments examines the two main reasons for the UK’s poor performance and whether they deserve to be included in a global portfolio.

December 2019 feels like a long time ago. Boris Johnson’s Conservative government won a resounding election victory by promising to ‘get Brexit done’. Investors were relieved that we might finally get some certainty regarding the UK’s future trading relationship with the EU. The pound strengthened against the US dollar, allowing the UK to join in with the positive outlook dominating global markets (before most of us had heard of coronavirus).

Brexit uncertainty has hovered over the UK since the referendum in 2016 and has weighed on the pound and the country’s stock market. There was brief optimism as we took the first steps towards leaving the EU at the end of January, but that led to an extremely tight deadline for the two sides to conclude a free trade deal.

For all 27 EU member states to ratify an agreement, it should have been finalised by now. As that isn’t the case, we could leave without a deal in December, which, irrespective of your long-term view, would hurt the domestic and European economies. The pragmatic approach would be to negotiate a limited deal or change the timetable. Investors would welcome either of these scenarios, but until the two sides make some form of progress the UK will remain under a cloud of Brexit uncertainty.

Global stock markets consist of shares spread across a diverse range of sectors, but often the mix is different between each market. The FTSE100 has a lot of companies in the financial, pharmaceutical and energy industries, but it’s underrepresented in the technology industry, particularly compared to the US, as the chart below illustrates. 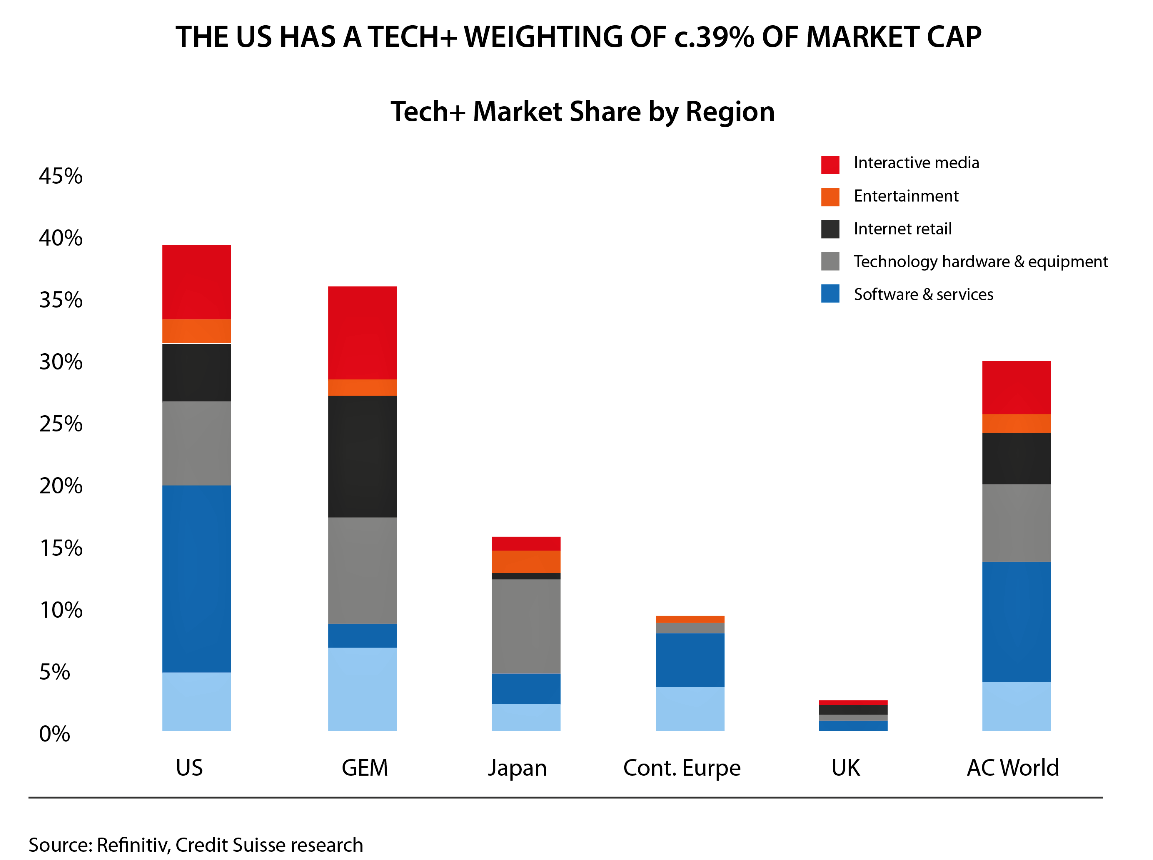 Energy shares have suffered following a collapse in oil prices earlier in the year caused by a disagreement between Saudi Arabia and Russia and reduced demand due to lockdown. The share prices of large companies like Royal Dutch Shell have halved over the last year as a result. Meanwhile, banks such as HSBC have cut the income they pay to investors, known as dividends, which has weighed on their shares. These companies operate globally so they don’t reflect the current state of the UK economy, but they have a big impact on the performance of the FTSE100 nonetheless.

In contrast, technology firms like Facebook, Amazon, Apple, Microsoft and Alphabet (parent company of Google) make up 20% of the S&P 500 index of the biggest US companies. Amazon has thrived during lockdown as people switched to online shopping, but its share price now looks priced for perfection. If the US government forces some of these firms to break up, investors may reconsider how much they’re paying.

A recent survey by the Bank of America showed the UK continues to be considered one of the most unloved regions of the world. Nearly a third of fund managers said they were underweight UK shares.

Not just big companies are out of favour. In many ways the fortunes of UK shares and the pound are linked. Brexit has weighed on the currency, affecting the value of domestic, typically smaller, firms earning their revenues within the UK.

UK shares also seem undervalued based on a range of metrics used to measure whether they’re cheap or expensive.

We need some good news, perhaps on Brexit, or a reappraisal of the relative merits of the major sectors that dominate the UK stock market. As investors, we try to buy low and sell high, which sometimes means the best opportunities appear when the picture is at its most bleak. There’s undoubtedly a place in a diversified portfolio for ‘cheap’ and unloved investments. The UK certainly fits the bill on both counts.

Issued by Omnis Investments Limited. This update reflects Omnis’ view at the time of writing and is subject to change. The document is for informational purposes only and is not investment advice. We recommend you discuss any investment decisions with your financial adviser. Omnis is unable to provide investment advice. Every effort is made to ensure the accuracy of the information but no assurance or warranties are given.